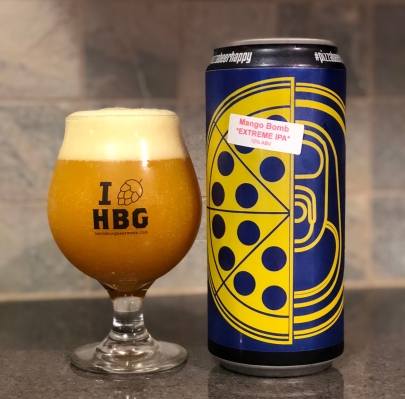 Heat is a remake. A remake of Mann’s own work, specifically L.A. Takedown a lackluster made for T.V. movie that never got much attention. But it allowed for Mann practice. To perfect it.

L.A. Takedown has rough edges, and low budget elements that belie a tight but limited script.

Heat expands the story to nearly three hours and opens the characters and stories that sit alongside heart-pounding action sequences that are absolutely perfect in execution.

It is the opportunity to do the same story again that I think makes Heat such a fantastic movie. L.A. Takedown gets ignored as a made for TV movie and Heat stands tall as a classic film.

With Pizza Boy Brewing Co.’s Mango Bomb we get another remake. One that I was quite dismissive of during the first iteration. But with this new release, we have a more focused product. The beer’s breadth has widened and its focus more clear.

The flavors are all mango all the time; this is welcomed. The body is light and the finish is long. As it warms the fruit gives way to a vigorous hoppiness that in the world of ever-expanding soft NE IPAs is welcome. HazyBros conditioned to having their palates coddled need not chime in here. This beer is not for you. This is a beer for the craft beer drinker that “takes down scores.” This beer is not “a regular type of life. It is not barbeques and ballgames.”

The Citra and Simcoe of this Triple IPA are beyond assertive. They are guns blazing through the brutal rush hour traffic of 15 pounds of Alphonso Mango puree per barrel screaming “Where is the fucking van?!?!”

The booziness is where I held my exit strategy. I was not going to let myself get attached to this beer. If I felt the heat, I was going to walk out in 30 seconds flat. In 2016, the 14% ABV hung on the ale like something of a bum wine. Now dialed down to 12% it remains boozy but without the astringency and plastic explosive door key to the mouth.

The flavors give you a very long finish that lasts like echoing gunfire through the canyon of downtown Los Angeles.

The mango is sweet and rich. The color is a creamy yellow and orange buttercup with saffron at the edges. It almost appears illuminated in the glass and the head is bright like an icy lemonade.

As I reached the end of the Crowler, yes I drank an entire Crowler of this on my own, the biting hops got more aggressive. As I closed in around the end, they pushed back harder. Caged in at the bottom they finished assertively but I loved it.

2016 Mango Bomb was Waingro. Unpredictable and a liability. It was there not just to take scores but to settle some due to a chip on his shoulder and an obvious psychopathy.

What has happened here? Pizza Boy flipped the script. In regards to the 2016 version, I summed up my feeling about the beer saying: “As a study for what is possible when pushing flavors to the extreme this beer achieves, but little else as it is nearly undrinkable.”

Having seen what was possible, now this beer achieves not only what extreme beers can be, but also works as it is thoroughly enjoyable.

2018 Mango Bomb is dangerous, dialed way up, and unrelenting but always in control. I loved it.

The use of Alphonso Mangos should not be ignored. These are the king of mangos. They remain very hard to acquire here in the US even after the lifting of a long-held ban, their use here is a statement by Pizza Boy about acquiring the finest ingredients, regardless of efforts or cost. This is a big deal.

I linked above but here is the link for my 2016 Mango Bomb Review: Total Mango Bomb.

The other great work by Michael Mann is The Last of the Mohicans. I would actually find it easier to argue that it is the finer film.

The changes between 2016 and 2018 appear to be minor tweaks in some cases but their impact has been incredible. I have to assume that this is what it is like playing at the edges and making extreme beers. Small shifts create incredible changes.

Each time I do a Pizza Boy review I end up coupling it with a movie. This is really fun.