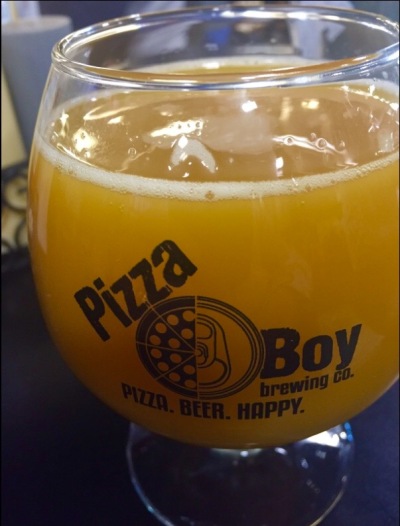 Total Recall is a fantastic movie. I love the original. It is one of Arnold Schwarzenegger’s best movies. It is a fantastically crafted original story by Philip K. Dick, brought to life on the screen and has aged pretty well for a sci-fi flick from 1990.

The 2012 remake was an absolute mess and it bombed at the box office.

Pizza Boy recently attempted their own remake of a classic.

Al Kominski had a hand in brewing at least two Tröegs Scratch beers by my recollection: Scratch 58 and 98. Those Scratch Triple Mango IPAs, were high gravity beers with mango and hops in massive quantities. They were great. Classics of the Central PA craft brewing revolution.

Fast forward to 2016 and Mango Bomb was touted as an “extreme beer,” this time by Pizza Boy. It too was brewed with an insane amount of mango and hops to go along with its 14% ABV.

This beer is bombed out in every sense.

I was excited to try it. I recalled the first two Mango Triple IPAs. I even pulled a cellared Scratch 98 out for #DrinkItNow in February. These were great beers. I was hoping for a great remake but I got something else.

The beer is totally opaque and sits thick in the glass. Mouth feel is akin to a thin, lightly carbonated tomato juice. The smell is mangos, dank hops, and booze. This beer is boozy from start to finish; and not pleasantly.

The flavors are of mango puree and mango rind. The hops are aggressive and punishing. The alpha acid bitterness, off the charts and lacking a balance of sweetness or malts to make it tolerable. The finish is that of Everclear and rubbing alcohol. This beer is bombed out so the name is appropriate. As a study for what is possible when pushing flavors to the extreme this beer achieves, but little else as it is nearly undrinkable.

Mango Bomb is like the three breasted mutant hooker from Total Recall. That sounds awesome. I wanted to see that.

But three tits are just weird and I only have two hands. So why was I so excited in the first place? More can sometimes just be more; not better.

Also the remakes rarely live up to the original. This remake was a bomb in name and result.

I have praised Al and Terry many times here on this blog and elsewhere. Unquestionably, they make great beers. Hell, they brewed a phenomenal beer with Boo-Berry cereal. But this one was a mess and just awful. That was a first for these guys. If they go another five years without putting out a bad beer, who could find much fault in that?

I was slow to post this, so now the beer is off the tap list at Al’s. I hope it gets toned down before making another appearance.

I hate ripping a beer. I don’t particularly like doing it.

Some people live a charmed life.  Sam Calagione always seemed like that kind of guy to me.  20 years ago this week Sam founded Dogfish Head Brewery in Milton, Delaware.  Over the past two decades the brewery has grown into a 175,000 barrel behemoth in craft beer, Sam has become a spokesperson for craft brewing, and few others have done more to move the industry forward.

I have the pleasure of visiting Rehoboth about two to three times a year.  I have run the Dogfish Dash, and will again this year.  The brewery in Milton is a great place to visit and I always make a stop at the brewpub. The brewpub is where to check out what strange one offs and new brews are on tap. When it comes to Dogfish… If they brew it, I will buy it.

My favorite time to visit the brewpub is during the off season on Wednesdays.  Way-back Wednesday is when they tap an aged keg of beer (at least 2 years old) and offer some tasty bottles for sale out of their cellar.  In the early spring of 2009, I purchased two 2006 bottles of 120 Minute IPA, and then I promptly put them away for a special day.

120 Minute IPA is described as “the Holy Grail for hop heads.”  Though the “whale” status on 120 Minute IPA has diminished due to ever changing tastes and wider availability, this beer still delivers a phenomenal experience.  The two hour boil while continuously being hopped and the month long dry hopped aging process leaves you with a beer that is 15-20% ABV and a palate wrecking level of bitterness.

To celebrate 20 years of off center thinking and brewing I opened the nine year old bottle of 120 Minute IPA and poured it into a DFH IPA glass.  The aging process produces significant changes in this brew.  The hazy golden hue turns to a deep mahogany.  The hop oils disappear and leave behind a sweet strong brew.  The harsh astringency of alcohol is mellowed; still boozy but more inviting.  The nose is somewhat oddly of maple and cherries with a slight orange tone.  This full bodied beer comes across as downright heavy.  Sipping brings forth rich malts with cherry and brown sugar sweetness.  This beer is sweet but without a saccharin-like finish.  It’s a proper sweetness.  Light in carbonation, and long lasting in the finish, a 12 oz. bottle will last all evening or split perfectly between two.

I have yet to find a beer that is capable of such dramatic change via aging as this one. After resting for a number of years it can take on the depth and complexity of a top shelf after dinner cordial.  A fresh 120 and a well-aged one are only discernable as the same brew by the label on the bottle.  It is a magical transformation.

The general rule is “hoppy” beers must be consumed fresh to get all their dank, resin, citrus and pine like flavors at peak.  But this beer is the exception.  I much prefer it aged 5 or more years and I am very happy that I have many more sleeping quietly in the dark waiting for their day.

Dogfish Head and Sam Calagione are champions for an entire industry.  They make great beer.  Period.  But their 20 years of success are not based on a charmed existence or good luck.  Anyone that has watched Beer Wars or the short lived series Brew Masters knows that their success is based on hard work, an exacting demand for quality, and unrelenting desire to push the envelope.  I think it is clear that this brewery is aging just as well as their top flight beer. They both are just getting better with the years. 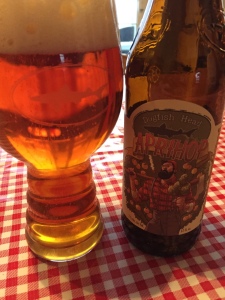 A classic spring brew that I seek out ever year. With a newly deposited tax return and welcoming the vernal equinox I sprung for the rare move and purchased an entire case; I rarely buy a case of anything.

A very popular and widely available seasonal beer, it’s the fruit beer for people that don’t like fruit beer. It’s like a double IPA with a fruity nose and a balanced use of malts.

Opening the beer and pouring the rich amber libation into a glass releases the fragrance of apricots. It’s in abundance in the nose with some hint of the northwest hops which are heavily used.

A vigorous pour provides for a light tan to off white head that dissipates slowly and helps offer up a very pleasing nose. This beer smells great and is inviting.

The flavors are complex but not delicate. Hops are loaded up and offer a earthy grassiness. The apricots are here in a supporting role and they merge well by adding depth to the bitter hops and sweet malts. The fruit flavors are a faint tartness as the beer reaches room temperature and really opens up. The 7% ABV becomes evident then too. This is a big beer but not over powering. The finish is long and crisp with a bit of dryness.

The flavors are in balance and that makes it an exceptional beer. If you have not had Aprihop you should take the opportunity this year. You will find it on tap at bars with discerning selections or in 4 packs.

It gets the Bearcat Seal of Approval.

A heavy IPA brewed with 25% wheat in the grain. It’s presents a warm golden hue with a welcoming cloudiness due to the shock of wheats. Served on a low stem tulip it’s pale white head only lasts a few moments but does provide sustained and welcoming lacing as the beer disappears from the glass.

The nose is a little dank and hops are clear with citrus right up front. Orange and lemon zests are right there and are inviting.

The mouth feel is light and refreshing. Hoppy but not completely bombed out in dry bitterness this beer has a balanced nature due to the grain bill. The citrus in the nose come right up front with a peppery sweetness in the finish. The finish is not long the the dryness tends to make my think “This beer cleans up after itself.”

9.0% ABV and you would never know it. Even as the beer warmed there was no astringency.

It gets the Bearcat Seal of Approval.

Columbia Kettle Works has been around for about 10 months and in the six visits I’ve made one thing is true; they are committed to constant improvement. Each visit is bringing better beers and more tightly wound standards.

If you have not visited I suggest dropping by. Not ever beer is a home run but they are really putting in the work.

If you go I also suggest the Coffee Stout. More like a porter in my mind as it lacks body but a well executed beer none the less.