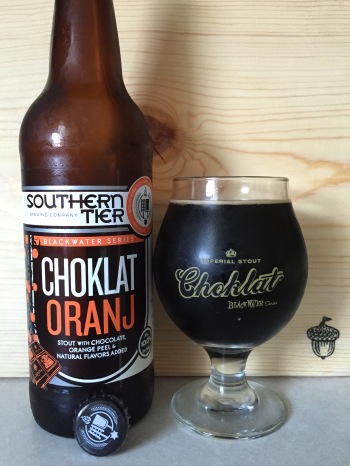 Over the past few months I have been enjoying the light, crisp and easily quaffable styles of the summer beer drinking season. Session IPAs, Goses, Berlinger Weiss and Hefeweizens have been taking up plenty of space in my fridge.

But I love stouts. They were my first love when coming to craft beer and they always draw me back.  So a week ago when I saw a lonely bottle of the new Blackwater Series Choklat Oranj from Southern Tier I knew it was time to mix it up.

As far as I can tell, and this is my educated guess, the Blackwater Series are Imperial Stouts brewed with the same four “mother” malts and two “father” hops. This provides for iteration. Using the same base for each brew allows for variation while also breeding familiarity. The Blackwater Series is made up of Choklat, Crème Brulee (the most impressive of the bunch), Warlock (a pumpkin beer) and Mokah.  Previously, this series also included Jahva and Oat.

Choklat Oranj is the newest edition to this series and is another great iteration. It takes the familiarity of the series and the big chocolate flavors of Choklat and adds a refined orange breeziness. Opening the 22 oz. bomber and pouring into a snifter you first get whiff of dark chocolate buddied up with orange oils. The beer sits dark as pitch in the glass with no head.  It drinks heavy but with a curvy body like a playboy centerfold. Chocolate and roasted malts dominate with a long sweet finish of orange peel.  This is like drinking a liquefied Terry’s Chocolate Orange. I would be stunned if that was not part of the inspiration. The beer is silky with a lingering orange and citrusy release.  While the beer is 10% ABV it never gives a hint of the booze even as it comes to room temperature.  Drinking this beer slightly warm really opens up the flavors as the orange acidity is boosted late in the drink.  Let this sipper rest in the glass and enjoy it slowly.

What Southern Tier have done here is create a dessert beer just like its brothers, that fits right between Choklat and Crème Brulee in sweetness.  Oranj is not as creamy as some others in the series and is more acidic; making it more versatile in potential pairings.

The “variation on a theme” works well with the Imperial Stout style.  Locally, Spring House Brewing Company does something similar with their stouts: Planet Bean Coffee Stout, Satan’s Bake Sale (Mint Chocolate Chip) Stout, Kerplunk! Imperial Chocolate Stout, and the very impressive combo of Big Gruesome (Chocolate Peanut Butter) and ‘lil Gruesome (Peanut Butter and Jelly) Stouts. They all have a familiar backbone. The iteration and slight variation provides for exploration of how flavors can be magnified, muted, or changed via slight alterations and bold flavor additions.

It may still be the heat of summer but a sweet, thick stout can be just the ticket to changing up your beer choices. Sweet stouts are undeniably a great way to finish a fine dinner.  You would be hard pressed to find one better suited to the task than Choklat Oranj or any of the other Blackwater Series beers.

Post Script: During Harrisburg Beer Week’s Little Big Beer Fest the ladies at Stouts and Stilettos were pouring their collaboration with Pizza Boy Brewing, Sun Kissed Stout.*** Sun Kissed was an imperial chocolate and orange stout; as such is easily comparable to Choklat Oranj.  Similar in style and intent these two had a number of differences according to my notes and recollection.

The Sun Kissed Stout was lighter in body and was deeper in the roasted malts. This impaired a slight smokiness to the nose and finish.  The flavors imparted by the fruit in Sun Kissed was closer to orange rind and pith as opposed to the Southern Tiers orange oils. While the Oranj skews towards sweetness, the Sun Kissed had a bit of spiciness and roasted flavors. Both were great beers… the good news is while it may be hard to find you can still pick up a bottle of Choklat Oranj.