East End Brewing Company and Pizza Boy Brewing represent the two areas of Pennsylvania that matter to me personally.  Over the past decade plus I have spent more time on the PA Turnpike than I would like to admit traveling between my old home (Pittsburgh) and my new home (Harrisburg and later Lancaster).

East End has been making phenomenal beers in Pittsburgh since 2004 and are at the center, geographically and metaphorically, of the region’s craft beer surge.

Al’s of Hampden was where I discovered the funk and the sour of craft brewing; either through Al’s wonderfully curated offerings, Pizza Boy Brewing or Intangible Ales. It has been where I know I will find great beer here in the Harrisburg area every time.  It’s bullet proof.

So when Al teamed up with East End to make a Berliner Weiss I knew I would have to check it out.  Moonstomp (named after a Reggae song) is a cloudy straw colored beer.  The brew was crisp and refreshing.  The nose was similar to that of Big Hop, an exceptional pale ale by East End and was fragrant of apples. The light bodied and effervescing brew had an easy drinking character. The flavors of apple and slight bits of lemon along with a pleasing mouth feel made this beer inviting; while the long slightly sour finish made it slow going. A palate-cleansing tartness of lactic acidity sold this beer to me as perfectly executed.  A fine collaboration and bringing characteristics of both brewers to the final product, it is highly recommended.

Moonstomp is currently available at Al’s both on tap and in 22 oz. bombers. It will see a limited release on Saturday at East End.  You will want to arrive early for this one if you are in Pittsburgh.

Al also released a bourbon barrel aged version of his beloved Sunny Side Up Stout. This coffee stout was aged for about four months in Woodford Reserve barrels Reserve barrels and yesterday ten and a half kegs of it were tapped starting at 11 am.  Glasses and Crowler fills sold out the allotment before the dinner rush ended. The numbers on how much was sold as figured by my friend Jeff… were in a word, amazing. Al was apologetic on social media about selling out half the stock so quickly. He need not be. The beer was fantastic.

Served in a wine glass, the pitch black stout shortly held a mocha brown head and smelled lightly of bourbon, vanilla and cold coffee. In the front, it tasted of chocolate, coffee, and roasted malts.  The bourbon flavors of vanilla, caramel and oak come along to finish and linger pleasingly.  The full bodied beer never gives up a burn or astringency despite the 10% ABV or the long rest with the spiritus frumenti.

This is barrel aged beer done right.  The aging process expanded the character and flavors of an already exceptional beer.  It added depth and complexity and never diminishes the base.

Al will be tapping this beer again today (7-30-15) at 4pm.  It will be available by the glass and in 32oz Crowlers to go. (Special thanks be given to Zeroday for helping out in this regard.) Get to Al’s early. This will sell out.

In order to bring this posting full circle I also decided to crack open one of my two bottles of Homewood Reserve (2014) that I have been sitting on.  This bourbon barrel aged version of Blackstrap Stout by East End was a fine compliment to the Sunny Side Up.

It too played with the subtle end of the barrel aging spectrum. The nose is thick of roasted coffee and hints of bourbon. Medium bodied and lighter than the Sunny Side Up.  Homewood Reserve was lightly carbonated but with microscopically small bubbles.  Easy drinking for an aged stout it had a long and very dry finish of coffee, vanilla and slightly of wood.  As the beer warmed up, just a faint burnt smokiness entered with an almost peaty character. The most interesting flavor was a mineral like taste that would be akin to a full bodied deep red wine.  This was both surprising and pleasing.  A great beer.

The thread that weaves all three beers together beyond the collaboration between the two breweries and the similar styles is the understated approach to flavors. These beers work at the edges. Never being over powering with any one taste. Instead they gently suggest various impressions of the ingredients and processes used to make the final product.  This is brewing at a high level.

Post Script: Beer geeks frequently talk of chasing “whales” the seemingly unobtainable beers that many covet. Usually these beers are from far off states sold in incredibly low volumes. I am generally dismissive of these snow flake in hell type beers. I stopped chasing “whales” a long time ago.

But there are “whales” to be had in our own backyard. I just had three of them. We need to recognize the quality we have locally and cheer this as a grand success for the craft beer community here in Central PA. 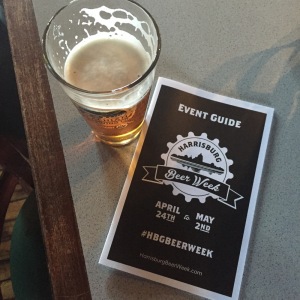 About dozen years ago, when I first moved to Harrisburg from Pittsburgh I lived in downtown on North 2nd Street. I visited the bar scene along my street three to four nights a week. I worked at a beer distributor as a second job a couple weeknights and on weekends. Back then I considered myself above the average beer drinker because I preferred Guinness and spoke well of Yuengling Porter. Drinking dark beer alone a differentiator and sign of my good taste.

Then one cold afternoon more than a decade ago I wandered into Troegs Brewing Company’s tasting room; the one that used to be in Harrisburg. I had a Hopback, a Pale Ale or maybe even a Troeganator… it blew my mind. Here was beer of a completely different nature. It was flavorful in a way I did not know it could be. It was a revelation in every sense of the word.

Shortly there after, seeking out other beers of high regard I stepped into Appalachian Brewing Company (ABC) on Cameron Street. Their beers were sweeter and more approachable but no less interesting to my plebe beer tasting palate. Here again was beer brewed with care and respect. ABC’s then brewer, now owner/brewmaster of Roundabout Brewing in Pittsburgh, was my neighbor. This along with drinking regularly at Troegs helped expand my interest in craft beers.

Years later after I had given up on corporate beer and became fully committed to craft brews, a couple friends and I discovered Al’s of Hampden. This was back when he had six tables and maybe twenty or so taps. Here my world opened to styles of beer that I couldn’t have found elsewhere… Saisons, Black IPAs (remember when they were the new hotness), West Coast and triple IPAs and “What the hell is Brettanomyces?”

So last night at the Harrisburg Beer Week kickoff party, I had a beer that in many ways celebrated not just the region but my own journey to craft beer. (717) Collaboration Ale by ABC, Pizza Boy Brewing (Al’s of Hampden), and Troegs Brewing Company is my history with beer in a can. While Sara Bozich and the ladies at Stouts and Stilettos kicked off what took a ton of work to birth, I was thinking about my decade long journey with beer and the Harrisburg area; the two are woven together.

(717) Collaboration Ale is a strange beer that is brewed for a wonderfully strange area code. The area code where it gets its name holds a company town where government is the company. It is also home to some of the most fertile farmland in the country. The area has city life and Amish carriages all at once. Just as the area code is a hybrid, so is this beer. It has the character of noble hops like an IPA with the range of flavors of a Farmhouse Ale/Saison. This beer is hoppy in the front with a pronounced sweetness while providing the long dry finish and Chardonnay tang of a farmhouse brew.

Hybrid beers by their very nature are complex but this one is just uncanny in its depth. It starts with a billowy and long lasting head from a vigorous pour that provides a welcome yeast and peppery aroma along with some sweet and sour flavors in the nose. The slightly amber and completely clear and clean appearance are inviting and representative of the exacting standards these brewers demand.

The flavor profile provides for a bit of the honey sweetness up front as is typical for ABC beers in my opinion. The middle is all hops with a generous Nugget hop profile that is all Troegs. The finish is long and dry with a proper white wine and slightly sour notes clearly attributed to Pizza Boy Brewing’s history of sublime sours. The ability to definitively pick out the distinct characteristics of the three brew houses is truly unique for this collaboration. This beer is incredibly impressive on multiple levels.

The 7.17% ABV ale is easy drinking and sits comfortably in either a standard pint glass to be casually imbibed or savored in a snifter quietly with reflection.

It is available on draft during Harrisburg Beer Week at Al’s of Hampden, ABC, and Troegs and will be released in 16 oz cans on Monday, April 27th at distributors in the area. If you get the chance, I highly recommend picking some up.

(717) Collaboration Ale gets the Bearcat Seal of Approval.

Today officially launches the first Harrisburg Beer Week (HBW).  After a ton of work by Sara Bozich, Colleen, and Chelsie we can finally see Tierney’s initial dream come to fruition.  Best of luck to all the organizers and I hope that Harrisburg River Rescue brings in a boatload of donations.  I am doing my part, you should too.

I will be attending the HBW VIP Kickoff Event tonight at Appalachian Brewing Company thanks to the generosity of Merlot Mike from Hershey Vineyards and Brewery. I am very much looking forward to having a glass of (717) the collaboration beer between tonight’s host (ABC), Pizza Boy Brewing, and Troegs. I am sure it is going to be a great event to start a great week for the city.  Expect a beer review of (717) tomorrow right here at BearcatOnBeer.com.

Speaking of (717), it will be available for purchase in 16 oz cans throughout the Harrisburg Area beginning on Monday, April 27, 2015.  Be sure to pick this one up early as I am sure it will sell out very quickly.

Really quickly, here are some of what I think are HBW’s can’t miss events:

In other PA Craft Beer News, this week New Belgium officially announced it was entering the PA market and has signed on a dozen distributors including locals, Ace Beer Distributors and W&L Sales; both are HBW sponsors too.

Yesterday, the Trib in Pittsburgh has a great story on women in craft beer, its a great write up.

Finally, Jason Notte on the brilliant Stan Hieronymus’ argument that craft beer loyalist are fighting the wrong battle.  Always remember what Steve Jobs said you should be “skating to where the puck is going not where it has been.”