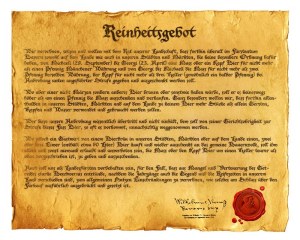 A lot of hay is being made these days over the definition of “craft beer” and “craft brewer.”  Recently it appears most of these arguments stem from opposing legislation called the Fair BEER and Small BREW Acts. When boiled down, these are tax bills. Seeking to create tax relief for either small brewers (what you typically think of as craft) and big brewers (AB, MillerCoors, or The Macros). As much as I would like to wax public policy and argue that “one man’s tax relief is another man’s tax loophole” this specific issue is moot as the legislation is all but dead.

But these bills did leave the beer community with one interesting question: “Is The Boston Beer Company (AKA: Samuel Adams) a Craft Brewer?”

Bryan Roth over at This Is Why I’m Drunk postulated, reasonably so, that the volume of hard tea and hard cider produced by Boston Beer has resulted in it no longer being just a beer company. Simply stated, beverages other than beer are boosting the profit margins, significantly so, that the craft brewer distinction is reasonably in question. He makes an interesting and valid point in regards to The Boston Beer Company.

But I think the question still remains… What makes a brewery “craft?”

I am going out on a limb here but I don’t think it is based on volume. It is not based on an arbitrary number of barrels produced per year. That is exactly what the figure six million barrels is, arbitrary.

To me craft brewing is about the art of brewing and a philosophy. It is about being committed to the product and the customers who buy the product. There is an entire community of beer drinkers in this country that are committed to drinking real beer. This sub-culture is made up of beer snobs, beer geeks, beer evangelists, home brewers, and community and regional breweries. In many cases once regional breweries now have bi-coastal operations and/or nationwide distribution. If there is one thing all these players have in common it’s a stake in the industry they love.

To define this fine libation and the people that make it as being craft or not craft based on arbitrary volume numbers does nothing to help understand the product nor the people making and consuming it.

So I offer this definition:

Is this definition perfect? Probably not. I am not quite that arrogant and I am sure Budweiser would say their adjunct lager swill fit that definition to a T.

So maybe this is just a start to having a serious discussion about what makes craft beer, craft brewers and craft beer drinkers the incredible movement it has become. Because arguing it’s about volume says nothing about what is really important…making and drinking good beer.

Postscript:  As I wrote this I really tried to develop in as few words as possible what defines craft beer. But this is just one guy’s musing about beer and brewing. What you see above is my best shot at it. Others certainly can do better. What may be necessary is for American craft brewers to adopt their own version of the Reinheitsgebot, The German Beer Purity Law. This could be a way for the craft beer industry to define itself.

It would be up to brewers to determine what it means to be craft and to do so with intent. This should be done as a recognized understanding and commitment for the sake of the consumer.

The incredible limitations of the German Purity Laws obviously do not fit for the American craft beer industry but the intent at its heart does. An incorporation of guild regulations, adhered to by brewers in the collective, could help an industry experiencing skyrocketing growth and stave off the potential fallout of a bursting bubble in the years to come. It would be a promise to the consumer that the product adheres to strict and exacting standards and that it is of the highest quality.