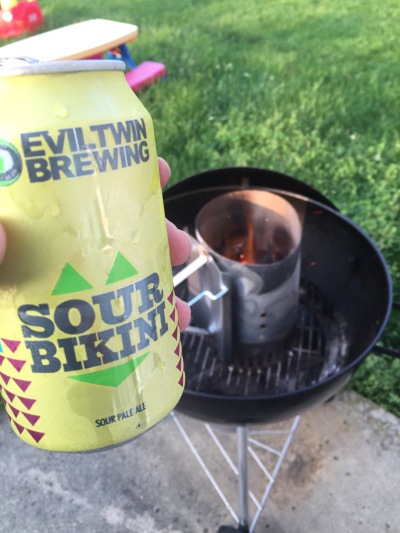 Fire up the grill. It is summer… or as I call it “Beer Season.”

This past weekend, Novak Djokovic won the French Open capping his career grand slam of tennis. It was a hot and humid day in Paris. He beat professional second banana Andy Murray in four sets to become the eighth man to complete the professional grand slam and the first man since 1969 to collect all four in a row. I watched the last set knowing that history was about to be made.

Watching the championship break point, and seeing “Djoker” define his career was anti-climactic. It happened and then… well it is the same with every tennis major. The winner just falls to his/her knees. Maybe lays down (this is a little weird in the French clay) and they cover their face with their hands. They shake their head in disbelief. They then get up and shake their opponents hand (“No. You’re the best. No really you are.”) Then they clap to the crowd with their racket.

It is always really weird.

It is because the victory is theirs alone. They have no one there with whom to celebrate. They are alone and standing in the arena to celebrate their accomplishment with thousands staring down at them. It looks and feels hollow.

In any other sport the victory is celebrated with teammates. Everyone jumps into the pile. Hugs, high fives, and the “Holy shit! Did you see what we just did?!?” is shared together. Even golfers have a caddy and the intimacy of a crowd pushed against the green with which to revel. Tennis players have ball boys that act as statues and officials that they just screamed at for a week over in or out calls measured in millimeters. Their joy is largely unshared which makes it far less joyful.

Beer is in danger of being the same. Beer is a beverage to be shared. Beer sipped alone largely lacks joy.

There is no beer better for sharing during this hot and humid summer than Sour Bikini by Evil Twin and Central PA local Intangible Ales. It is brewed together and should be enjoyed the same way.

This collaboration beer tastes like a summer beer should in 2016. Sour Bikini is refreshing and eminently crushable. The light bodied 3% ABV ale (yep… just 3%) has a citrusy, lemonade quality which is crisp and easy drinking. A hazy ale that is effortlessly quaffed generously right from the can. The slightly funky, sour start and finish are quick and do not linger too long with only a faint pucker of peach and citrus throughout.

You are going to want to fill up a cooler with these and hang out on the back deck with friends. Sour Bikini is not a beer for sipping while deep in thought about the trials of your life like some complex wintery barleywine. This beer is for drinking with your friends and laughing about the ironies of life, spraying the kids with the hose, saying “The damn country is going to hell!” or “Watch this!” It is for friends, and my beer friends are some of my favorite friends.

This is the beer I want to put in their hand on a hot, humid summer evening. I need to share this beer with them, eat some hot dogs, light a fire in the pit out back, and listen to the cicadas beg for their one chance at getting laid in 17 years.

Do it together because celebrating life is a summer thing and no one celebrates life alone. If you did, it would be weird, like winning the French Open and having no one to hug.

Stouts & Stilettos has a great rundown of Summer beers to enjoy. I recommend their post and the beers there in. It’s a great list.

Here are some others to consider:

Summer Love by Victory
Jammer by Sixpoint
Pacifico – Skip the Corona, drink this.
Allagash White
Sunshine Pils by Troegs
Red Stripe – It tastes so good on vacation who cares that it is made in Latrobe, PA?
Seersucker Pils by Abita (Is there anything more southern than a seersucker suit in summer?)
Orange Blossom Cream Ale by Buffalo Bill (For Mick)
Sunshine by New Belgium
Crusher by Iron Hill Brewery

One thought on “Beer and Victory Taste Better When Shared”