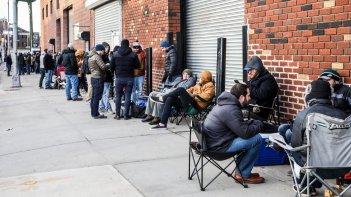 It can easily be stated that craft beer in America has been in a constant state of change and flux. Trends come and go. Growth accelerates and wanes. Styles rise to prominence only to be soon usurped by new variations. Breweries open. Breweries close. It is a near constant churn.

But there is a cultural shift that clearly has taken hold as of late. It surrounds NE IPAs.

I am not focusing so much on the fact that a hotly debated NE IPA style has shifted the culture we associate with craft beer. Even its enshrinement as a defined style was not without a lot of debate that left some on both sides seriously unhappy. There are lots of places debating this.

But the style, or more importantly the predominate way NE IPAs are distributed is shifting the way we engage with craft beer.

Can releases at breweries have brought us long lines. People lining up to buy limited four packs or maybe a case of beer. More frequently these lines are getting longer and longer and inherently people start lining up sooner in order to get to the front.

In the past, you went to a brewery or a brewpub and you sat at a long bar or maybe a long table.

Now increasingly we have people standing in long lines. Conversations become less about the enjoyment of the beer in the moment and more regarding the market value based on allotments and black markets.

High tops are replaced by folding chairs. Buying a round replaced with beer swaps in the line.

A lot of this is driven by the distribution format. A limited can release at the brewery for an in-demand short shelf life or every expensive barrel aged beer has implications. Some of this is a natural response. It can be argued this is just how it was always going to play out.

Self-distribution and limited releases as a method have been highly lucrative to many breweries. Some have seen massive or exponential growth occur in literally months.

This has not come without a cost. The lines can be disruptive to neighborhoods. Beer mules are not there for the enjoyment of the beer but to make fast cash flipping the product. Trash from sharing and swapping beers gets left behind by the few troglodytes that still litter… in 2018.

Vine Pair has a story about how this has shifted the fortunes of a number of breweries but also how it has changed the clientele.  It is not a flattering article to Vine Pair or the brewers referenced.

One can simply say and without judgment, things have changed. To say it is the same as it ever was is beyond naive.

Therefore the question then shifts to: Is it better this way?

For me, I would rather sit at a long table in the brewery than sit in a long line outside of one, regardless of the beer in my glass.

This is not the end of the world.

This trend will be followed by a new one; just like the last one was.

Sitting in brewpubs are more fun than sitting in line. If you think this is a controversial statement or that opinion is out of line then I don’t know what to tell you. Just getting out ahead of what I am sure will happen with someone.

If you like sitting in lines for beer, good for you. These are truly halcyon days for you.

If you do wait in line, tell the asshole that leaves his garbage to pick it up.

VinePair really went over the edge in the piece linked above.

UPDATE: After I published my fellow podcaster Easy Pretzel had some thoughts. They are shared here for your consideration.

As the unofficial arbiter of NEIPAs, this article couldn’t have been more dead on. Listening to the neckbeard conversations about all the exclusive beer that they have tried is like listening to two world leaders discuss their nuclear capability’s: nobody cares about your small dick measuring contest. The lines are getting longer, and breweries can’t seem to understand the concept of prepaying. Get the line moving faster, so by the time everyone gets to the front of the line their beer is ready. This will allow people to stay instead of just wanting to take their beer and drive home. Some top NEIPA locations don’t even have on-site pours, which I find obnoxious.
This all could be solved if these OG brewers stopped being so stubborn and made a proper NEIPA. We are slowly starting seeing more and more embrace this great style, so much so that Tree House secondary prices alone have dropped 30% over the last 12 months. Wouldn’t it be funny that the same beer that divided the community would also be the same beer to unite us all at the long table?